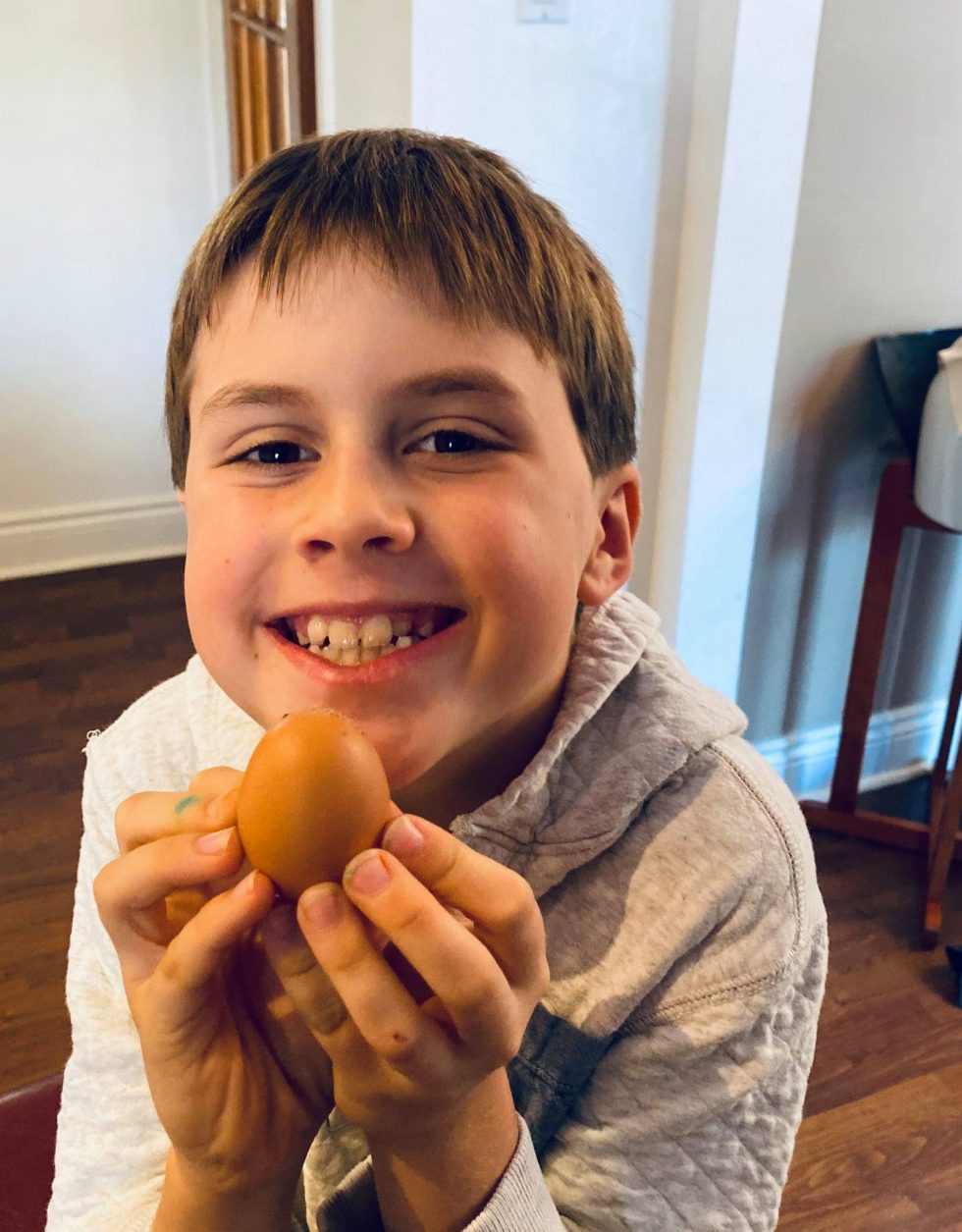 Business / Faith
YOU’LL NEVER GUESS HOW MUCH THIS EGG COST!
Five months ago, I sat pondering the question: “What if we got chickens? We’d only need a couple to provide fresh eggs for us every day. That wouldn’t be too much work.”
I hemmed and hawed about it for weeks. I researched online. I asked questions of friends who had chickens. I found out how much a pre-built coop cost. I even “put out a fleece” (it’s a Christian thing-look it up). After much deliberation (and after my fleece prayer was answered), I decided I would go for it.

Apparently, there was a chicken-vibe going around then because, when I called around to buy ready-to-lay hens, there weren’t any available…and there wouldn’t be for months!
A friend advised that raising chicks could be educational for my son and would help us be part of the chicken’s character formation. She let me know that I’d just need a brooder (whatever that was) if I was going to get chicks. The sound of it all sounded so cute so, I thought, why not?
Believe it or not, but most places were sold out of chicks for months as well!
A little digging led me to discover the hatchery where all the stores bought their chicks. One phone call and….bingo! I had found the chick jackpot! The problem was, I didn’t know how to answer their question: What kind of chick did I want? There’s more than one kind? I want the egg-laying kind. They all lay eggs? Oh….

Another chat with my friend had me equipped with my top picks. I’ll take 2 of these, 3 of those, 2 of those, 3 of those, oh….and 2 of the kind that lay blue eggs (who doesn’t want blue eggs for breakfast)!
I don’t think it actually sunk in that I was buying 12 chickens until I called in to place my order for the coop and found out I needed the bigger model. Having 12 chickens is normal for a family of 3, right?
I scrambled around to buy supplies for the chicks. I researched what I’d need:
Finally, on June 23, after driving an hour to get to the hatchery, I finally became a chicken mama.

After seeing the lady in front of me leave with a big box with holes in it, I was shocked when they handed me a tiny box that looked even smaller than a carton of eggs! “They’re all in there?!”, I exclaimed. I drove home, excited and scared, as the little chicks kept trying to pop their heads out of the box.
After ogling over the chicks for hours, I finally left them in their make-shift brooder. But I checked in on them every 30 minutes: were they cold? Hot? Needing food? Water? Should I clean their box again?
At one point, I noticed something: there were 3 of one of the kinds that I had only ordered 2 of. I counted and recounted….yup, I had, not 12, but 13 chicks. A baker’s dozen!
My friend reassured me that chicks were easy to take care of: “You just need to keep them warm, fed and watered, and be sure their vents stay clean.”
That sounded easy enough. I was diligent in my tasks. Just one problem: I didn’t know what a vent was. I didn’t want to bug her again, and she said it so matter-of-factly that I figured it must be obvious. So I looked at the chicks and realized that, on either side of their head, they had these different feather formations – kind of like ears. Those must be the vents!
“All clear!” I happily observed.
Day after day, I checked every aspect of the chicks’ health. I stayed up almost all night the first night because, after watching my hundredth video, I realized I got the wrong heat lamp. Mine was white. That was going to stress them. They needed a red one. I couldn’t sleep because I was so worried. The next morning, Steve went and bought a red lamp. Phew!
After a few days, they all seemed fine, but, boy, did some of them have a poopy bum! By “chance”, I stumbled upon a video that caught my attention: “Cleaning chicks poopy bums”. It was almost midnight when I clicked on the video, and it was then that I finally realized what a vent was!!! Who the heck named a chicken’s poop hole a vent!?!
The video explained that, if a chick’s vents are not clean, they could die. OH MY GOODNESS!!! I almost killed my chicks because I didn’t know a poopy bum was deadly! So, I stayed up to 3 AM cleaning chick bums.
The following weeks lead to more mishaps than you could imagine. We had to change their brooder box twice. Chicks grow fast! Eventually Steve had to build one to fit them all.
One night we went to check in on the chicks. Our normal habit was to count to 13 to make sure all were accounted for. There were only 4!
We looked around the garage…no sign of them. We checked the doors – they were closed and locked. We finally found them when we looked up. We clearly forgot chicks can fly (there was no top on their brooder)! There they were: happily perched on the rafters of the garage.
That’s the night we realized we had to finish the coop and move them in there…fast!
Over the months we’ve had the chicks, we’ve learned a thing or two.

And, if you’re me and you see that one of your beautiful chicks is limping, you immediately want to fix it. So you give her special food, and rub her legs with essential oils, and give her a lavender and Epsom salt bath in your marble bathroom sink, and wrap her in a towel, from which she will try to escape, but only after she poops all over the towel.
And, when your neighbour posts on Facebook that they saw a beautiful fox in their yard that morning, you panic. And after you also see said fox on another day, your husband sits on top of the solar panels for nights on end with a stick, waiting for the little bugger to show himself. DON’T MESS WITH MY CHICKENS, MOTHER F**!! (Relax, it’s short for fox.)
It’s been an unbelievable journey that we never could have anticipated.
But, today, we got our first egg.
This egg has probably cost us $6,000 and innumerable hours of work…and sleepless nights…and emotional stress! How foolish we would be if we looked at this egg and thought, “What a waste of money!”
Because we know this egg won’t be the last. It’s just the beginning. We paid the cost because we know that, with what we have built and learned and invested, we are setting ourselves up for a huge harvest of eggs for many decades to come. Many generations of chickens and many families will be blessed because of what we have created.

It’s the same perspective we had when we started our business. We spent months and months investing time, energy and resources to create something that, at the beginning, didn’t look like much. It only seemed to amount to a tiny egg.
But, the foundations that we laid in those early years, are still paying earnings to us today. As we’ve continued to build our business over the years, we have been able to see many families blessed, many lives changed and many people’s health transformed. It was a journey that we never could have anticipated when I taught my first class—a journey full of more trials, heartaches, difficulties and stumbling blocks than we could have ever imagined. But, it’s also been a journey full of more love, joy, friendship, hope and financial abundance than we could have ever dreamed.
Abundant life isn’t a soda machine. We don’t put a quarter in and get abundance out. We invest; we struggle; we learn; we grow; we die; and we live again.
And no matter how much abundance we experience here on earth, it’s just a tiny egg. The real abundance is yet to come. Be in it for the long haul. Keep your eyes on the prize.
There’s so much more.
“In my Father’s house are many mansions: if it were not so, I would have told you. I go to prepare a place for you.” John 14:2

As I evaluated the cost today of this single egg, I didn’t realize I would have yet another cost to pay: this one paid by my heart.
Today, I lost Jenny. Jenny was precious to me. If you’ve never had chickens, you won’t understand. They’re not just stupid birds. They have personalities. They are so individual and unique. Jenny was timid and gentle, always frightful, but she’d never hurt anyone. I’d been nursing her for three days. She got weak. She stopped eating. I spent hours feeding her with a little dropper. I held her, wrapped her, and prayed over her. But today she succumbed to whatever was ailing her. Today, we had to bury her.
Some people are able to handle loss easy. I’m not one of them. It comes at a great cost to my heart. But, I’ve realized, this cost, too, is worth paying.
“To love at all is to be vulnerable. Love anything and your heart will be wrung and possibly broken. If you want to make sure of keeping it intact you must give it to no one, not even an animal. Wrap it carefully round with hobbies and little luxuries; avoid all entanglements. Lock it up safe in the casket or coffin of your selfishness. But in that casket, safe, dark, motionless, airless, it will change. It will not be broken; it will become unbreakable, impenetrable, irredeemable. To love is to be vulnerable.”
― C.S. Lewis, The Four Loves
[activecampaign]
Tagged: doterraempowered livingessential oilsfarmingkimberley milousisraising chickens